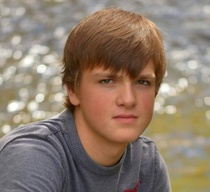 SHINGLEHOUSE, PA---Dawson Jacob â€œPeteâ€ Mesler, 16, of Shinglehouse, passed away on Saturday, May 28, 2016 at the Olean General Hospital, Olean, NY, after a tragic drowning accident in Shinglehouse after saving the lives of his brother and cousin.
Born March 3, 2000 in Coudersport, he was a son of Michael A. and Miranda B. Reed Mesler.
Dawson was a sophomore at Oswayo Valley High School in Shinglehouse where he also participated in the Seneca Highlands Career and Technical Center for automotive technologies.  He was a Varsity wrestler and was also a member of the Jr. Varsity and Varsity co-op football team with Otto Eldred High School in Eldred.
He attended the Allentown (N.Y.) United Methodist Church.  Dawson loved to hunt, fish, snowmobile, go carting, and tinker with anything with a motor. He was a fun loving young man who would give you the shirt off of his back.
Surviving besides his parents of Shinglehouse are a sister, Adrianna E. Mesler, at home; a brother, Asher Bentley Howard Mesler, at home; his paternal grandparents, Joseph A. and Virginia L. Mesler of Shinglehouse; his maternal grandmother, Cheryl S. (Bill Green) Reed of Bath, N.Y.; a grandfather, Earl Dickerson of Shinglehouse; his great-grandparents, Herbert and ImoJean Layfield of Allentown, N.Y.; and many aunts, uncles and cousins, including a special aunt, Christina M. â€œAunt Cissyâ€ Reed of Shinglehouse, and two special cousins, Reanne M. Stannard and Christopher R. Carpenter, both of Shinglehouse.
Dawson was predeceased by his maternal Papa, Michael Reed; his maternal great-grandmother, Virginia â€œG.G.â€ Reed; and his grandmother, Sharon Goss.
Friends may call from 10 a.m. to 1 p.m. on Saturday, June 4, 2016 at the Oswayo Valley High School gymnasium where funeral services will follow at 1 p.m. with the Rev. Diane M. Cox, retired pastor of the Allentown United Methodist Church, officiating officiate.  Burial will be in East Sharon Cemetery, Shinglehouse.
In lieu of flowers, memorials may be made to the Oswayo Valley High School, 318 South Oswayo Street, Shinglehouse, PA 16748 to establish a scholarship fund for the Seneca Highlands Career and Technical Center, specifically for the Automotive Technology program.
Dawsonâ€™s family has entrusted his care to the Virgil L. Howard Funeral Home, Shinglehouse.

To order memorial trees or send flowers to the family in memory of Dawson Jacob "Pete" Mesler, please visit our flower store.