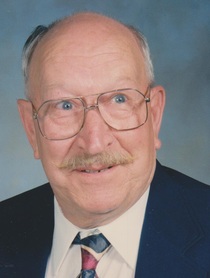 COUDERSPORT, PA---Dennis E. â€œDennyâ€ Goodenough, Jr., 92, a lifelong resident of Coudersport, passed away on Monday, October 12, 2015, in Cole Memorial Hospital, Coudersport, from complications of congestive heart failure.
Born on August 15, 1923 in Coudersport, he was a son of Dennis E. and Elsie J. (Stonemetz) Goodenough.  On July 15, 1950 in Brookland, PA, he married Evelyn D. VanDeBoe, who passed away on October 6, 1997.
After attending Coudersport High School, Denny was drafted in 1943 into the U.S. Army during World War II, where he served in K Company, 71st Regiment of the 44th Infantry Division, attaining the rank of Sergeant.  He was a Browning Automatic Rifle (BAR) gunner, landing in Cherbourg, France and following the D-Day Invasion, he mobilized on foot to Germany, engaging in anti-sniper operations.  Denny was awarded the Purple Heart for injuries incurred during the Battle of the Bulge.
Returning from the war, Denny was a truck driver hauling feed and other goods from Coudersport to Buffalo and Pittsburgh.  During the Fall months, Denny would often return with grapes for local Italian families for winemaking.  In the late 1940â€™s, he joined his father and brothers in business, operating the first Purina feed mill in Coudersport.  He eventually bought out his siblings, evolving the business into a grocery store and gas station.  In the late 1960â€™s the business evolved again, into Goodenoughs Outdoor Center.  â€œGoodenoughsâ€ became the largest sporting goods store in North Central Pennsylvania.  In 1978, Denny was interviewed by and quoted in a Sports Illustrated article on hunting in Pennsylvania where he was described as â€œthe portly, pipe-smoking entrepreneurâ€.  He retired in 1987, donating the remainder of the sporting goods stock to the Boy Scouts of America.
Denny attended Christ Episcopal Church and Park United Methodist Church in Coudersport.  He was a 65+ year member of Eulalia Lodge #342 F. & A.M. in Coudersport and the Coudersport Consistory.  In 2012 at the age of 89, he joined Eulalia Chapter #148 Order of the Eastern Star in Coudersport, alongside his granddaughter Jessica.  He was a 65+ year member of Potter Post #192 American Legion in Coudersport; a member of the 44th Infantry Division Association; a life member of the Coudersport Volunteer Fire Department; a life member of the Coudersport Volunteer Ambulance Association, for which he drove the ambulance until the age of 77; a member and Past President of the Brookland Club; a charter member and Past President of Potter County Recreation, Inc. (PCRI) and a charter member of the Susquehannock Trail Club.  Denny was a Past President of the Coudersport Borough Council and was instrumental in the decision to construct the Coudersport Flood Control Project after the 1952 flood.  As a youth he worked on the construction of the Town Pool (earning him the privilege of being the first person to dive in!).  He was also Past President and board member of the Eulalia Cemetery Association.
He loved the outdoors, his community, his family, a good joke and a good Manhattan.
Surviving are four children, Vesta M. (Daniel) Hackenberger of Summerdale, PA, Gretchen G. (Jerry) Songster of Coudersport, Penelope F. â€œPennyâ€ Goodenough (Tom Fealy) of St. Leonard, MD, and Dennis Edward Goodenough, III (Douglas Couture) of Coudersport and New York, NY; five grandchildren; ten great-grandchildren; and many beloved nieces and nephews.
In addition to his parents and wife, Denny was predeceased by an infant daughter, Elizabeth Jane; four brothers; and three sisters.
Friends may call from 6 p.m. to 9 p.m. on Friday, October 16, 2015 and from 2 p.m. to 3:30 p.m. on Saturday, October 17, 2015 at Christ Episcopal Church, 601 North Main Street, Coudersport.  A celebration of Dennyâ€™s life will be held at Christ Episcopal at 3:30 on Saturday with the Rev. Janis Yskamp, Rector, officiating.  Burial will be in Eulalia Cemetery, Coudersport.
Members of Eulalia Lodge #342 F. & A.M. will conduct a Masonic memorial service at 8:30 p.m. on Friday evening in the church.
Members of the Potter County Honor Guard will accord military honors on Saturday at the church.
In lieu of flowers, memorials may be made to the Coudersport Volunteer Ambulance Association, 122 East Second Street, Coudersport, PA 16915; to the Coudersport Volunteer Fire Department, 171 Route 6 West, Coudersport, PA 16915; to the Christ Episcopal Church Organ Fund, 601 North Main Street, Coudersport, PA 16915; or to a charity of the donorâ€™s choice.
Dennyâ€™s family has entrusted his care to the Virgil L. Howard Funeral Home, Shinglehouse, PA.

To order memorial trees or send flowers to the family in memory of Dennis E. "Denny" Goodenough, please visit our flower store.