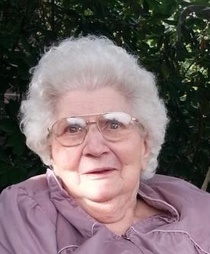 COUDERSPORT, PA---Jean J. Tate, 88, a lifelong resident of Coudersport, passed away on Saturday, April 30, 2016 at Sweden Valley Manor, Coudersport, after a short illness.
Born on September 30, 1927 in Coudersport, she was a daughter of Harold and Joyce Madison Jones.  On June 8, 1946 in the North Eulalia Baptist Church, she married Vincent E. Tate, who passed away on February 21, 2010.
Jean was a graduate of Coudersport High School.  She was first employed at the former silk mill in Coudersport and was later employed as a machine operator at the former Pure Carbon Company in Coudersport, retiring after many years of service.
Jean was a member of the Sweden Valley Faith United Methodist Church.  She enjoyed sewing, knitting, and cooking.  Her greatest love was her family.
Surviving are two daughters, Vicky J. (Fuzz) Haskins of Coudersport and Beryle T. Palmatier of Spring Mills; a son, Vincent H. (Diane) Tate of Littleton, Colorado; five grandchildren; seven great-grandchildren; and several nieces and nephews.
In addition to her parents and husband, Jean was predeceased by a sister, Alice Kenealy; and a brother, Jack Jones.
Family and friends are invited to attend a graveside funeral service at 2:30 p.m. on Tuesday, May 3, 2016 in the Sweden Hill Cemetery with the Rev. Thomas M. Shatto, pastor of the Galeton Shared Ministry, officiating.
In lieu of flowers, memorials may be made to the Sweden Valley Manor Patient Activity Fund, 1028 East Second Street, Coudersport, PA 16915.
Jeanâ€™s family has entrusted her care to the Virgil L. Howard Funeral Home, Shinglehouse, PA.

To order memorial trees or send flowers to the family in memory of Jean J. Tate, please visit our flower store.