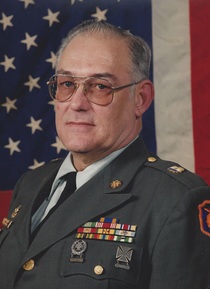 SHINGLEHOUSE, PA---John K. Volz, Jr., 71, of Shinglehouse, passed away surrounded by his loving family on Thursday, January 21, 2016, in Cole Memorial Hospital, Coudersport, after a long illness.
Born on November 9, 1944 in Olean, NY, he was a son of John K. Sr. and Betty Jean Bisnett Volz.  On April 5, 1969 in Olean, he married Melanie L. Lunn, who survives.
He graduated from Portville (NY) High School, Class of 1965.  John served in the U.S. Army having served in Vietnam during the Vietnam War.  He retired from the service in 1995.  He was employed by the former American Olean Tile Company in Olean, retiring in 2004 due to ill health.
John was a member of the First Baptist Church in Shinglehouse.  He was a life member of the Shinglehouse Volunteer Fire Department, a member of Shinglehouse American Legion Post #530, a member of the Potter County Honor Guard, and a member of the Disabled American Veterans.  John formerly served as a cubmaster in Shinglehouse.  In his younger years, he enjoyed playing baseball, softball, and football.  He enjoyed flower gardening, latch hooking, and was an avid sports fan.  His greatest love was his family.
Surviving besides his loving wife of 46 years are two sons, Dan (Gerri) Davis of Olympia, Washington and Shawn (Tricia) Volz of Edinboro; a daughter, Heather (Kevin) Youndt of Coudersport; ten grandchildren, Kyle, Courtney, Ryan, Tyler, Dakota, Austin, Kailyn, Tristan, Karlie, and Jason; two sisters, Barbara (Tom) Franke and Bonnie (John) Stevens, both of Florida; two brothers, Jan (Mary Ann) Volz of North Carolina and James Volz of Florida; and many nieces and nephews.
In addition to his parents, John was predeceased by his maternal grandmother with whom he resided, Rachel Bisnett; and a brother, Jerry Volz.
Friends may call from 2 to 4 p.m. and 7 to 9 p.m. on Sunday at the Virgil L. Howard Funeral Home, 118 South Union Street, Shinglehouse.  Funeral services will be held at 11 a.m. on Monday, January 25, 2016 at the First Baptist Church, Shinglehouse, with the Rev. Russell J. Horning, pastor, officiating.  Committal services and burial will be held in the Maple Grove Cemetery, Shinglehouse.
Members of the Potter County Honor Guard and active duty service members will accord full military honors on Monday.
Memorials may be made to the Shinglehouse Volunteer Fire Department, PO Box 475, Shinglehouse, PA 16748; to the Shinglehouse Volunteer Ambulance Association, PO Box 98, Shinglehouse, PA 16748; or to the First Baptist Church, PO Box 68, Shinglehouse, PA 16748.

To order memorial trees or send flowers to the family in memory of John K. Volz, Jr., please visit our flower store.