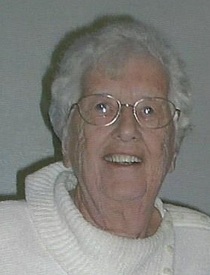 SHINGLEHOUSE, PA---Mary J. Kuhn, 83, of Shinglehouse, PA, passed away in her home on Saturday, March 14, 2015 with her loving family by her side.
Born October 26, 1931 in Bolivar, NY, she was a daughter of Donald B. and Agnes V. Austin Case.
Mary was a graduate of Bolivar High School, Class of 1949.  She was a graduate of Alder Graduate School with a degree in Theology and Psychology.  Mary was employed for many years by Catholic Charities.  She also served as a chaplain at the Olean General Hospital in Olean, NY.
Mary was a faithful member of St. Theresa Catholic Church in Shinglehouse where she was a Eucharistic minister. Maryâ€™s life was spent in service to the Lord.
Surviving are two daughters, Karen E. (Paul) Thomas of El Paso, Texas and Joyce A. (Rick) Johnson of Rochester, Minnesota; a son, Robert F. Kuhn of Buffalo, Minnesota; four grandchildren, P.J. Thomas, Jean-Luc Thomas, Ricky Johnson and Katie Johnson; two sisters, Donna Petzen of Shinglehouse and Grace Case of Webster, NY and Shinglehouse; and many nieces, nephews, and cousins.
Mary was predeceased by her parents.
Friends may call from 3 p.m. to 7 p.m. on Wednesday at the Virgil L. Howard Funeral Home, 118 South Union Street, Shinglehouse, PA.  A Mass of Christian Burial will be celebrated at 10:30 a.m. on Thursday, March 19, 2015 at St. Theresa Catholic Church, Shinglehouse, with Father Thomas Brown, as celebrant.  Burial will be in Bell Run Cemetery.
A prayer service will be held at 6:30 p.m. on Wednesday in the funeral home.
Flowers are gratefully declined. Memorials may be made to St. Theresa Catholic Church, PO Box 277, Shinglehouse, PA 16748.

To order memorial trees or send flowers to the family in memory of Mary J. Kuhn, please visit our flower store.