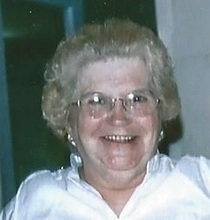 AUSTIN, PA---Patricia J. Bundy, 73, a longtime resident of Austin, passed away on Tuesday, March 1, 2016 in Cole Memorial Hospital, Coudersport, after a long illness.
Born on May 11, 1942 in Aliquippa, she was a daughter of Charles W. Sr. and Mary A. Paintiff Carpenter.  On May 4, 1990 in Coudersport, she married Stanley R. Bundy, who passed away on May 24, 2005.
Mrs. Bundy graduated from Hopewell High School in Beaver County.  While living in Beaver County, she worked at Stop & Go Convenience stores.  A resident of Austin since 1985, Mrs. Bundy was employed by Emporium Specialties in Austin, retiring in 2004.
Mrs. Bundy was a member of the Kingdom Hall of Jehovahâ€™s Witnesses in Kersey.  She was a woman of great faith. She enjoyed cooking, gardening, music and reading.
Surviving are five daughters, Sue M. (Rick) Galino of Monaca, Beverly A. Anderson of Monaca, Joyce L. Anderson of Dahlonega, Georgia, Rachelle M. Anderson of Center Twp., PA, and Lorra L. (David) Burns of Hopewell Township; eight grandchildren; fifteen great-grandchildren; five brothers; a sister; several nieces and nephews; and her Austin family, whom she dearly loved and was lovingly referred to as â€œGrandma Patâ€ or â€œAunt Patâ€.
In addition to her parents and husband, Mrs. Bundy was predeceased by a son, Richard A. Anderson, Jr.; and three brothers.
In keeping with Mrs. Bundyâ€™s wishes, there will be no public visitation.  She will be laid to rest in Homer Cemetery, Inez, next to her husband.
In lieu of flowers, memorials may be made to a charity of the donorâ€™s choice.
Mrs. Bundyâ€™s family has entrusted her care to the Virgil L. Howard Funeral Home, Shinglehouse.

To order memorial trees or send flowers to the family in memory of Patricia J. Bundy, please visit our flower store.