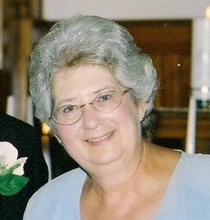 CERES, NY---Sandra M. â€œSandyâ€ Parker, 68, of Ceres, NY, passed away with her loving family by her side on Wednesday, January 28, 2015 in St. Vincent Hospital, Erie, PA, after a short illness.
Born October 18, 1946 in Ceres, NY, she was a daughter of Cornelius â€œSlimâ€ and Irene Newton Loucks.  On August 3, 1968 in Portville, she married David L. Parker, who survives.
Sandy was a 1966 graduate of Bolivar High School.  She was employed by K-Mart in Olean and prior to that had been employed by Wal-Mart in Allegany.
Sandy was a member of the Ceres United Methodist Church.  She enjoyed reading and crocheting.  Her greatest love was her family, especially her grandchildren.
Surviving besides her husband are a daughter, Gina I. (Jon) Livingston of Ceres, NY; a son, Brian M. (Katrina) Parker of Ceres, NY; five grandchildren, Dawson H. Parker, Karley A. Livingston, Austin D. Parker, Corey D. Livingston, and Teagan M. Parker; two step-grandchildren, Toby J. Livingston and Sara J. Livingston; three sisters, Joyce M. Button of Dansville, Sara Jane Austin of Shinglehouse, PA, and Linda K. (Don) Ginter of Ceres, NY; and several nieces and nephews.
In addition to her parents, Sandy was predeceased by a nephew, Brent Ginter; and two brothers-in-law, Leslie A. Button, Jr. and Wayne P. Austin.
Friends may call on Friday from 2 to 4 p.m. and 7 to 9 p.m. at the Virgil L. Howard Funeral Home, 118 South Union Street, Shinglehouse, PA where funeral services will be held at 11 a.m. on Saturday, January 31, 2015 with the Rev. Becky L. Edwards, pastor of the Ceres United Methodist Church, officiating.
In lieu of flowers, memorials may be made to the Bolivar Volunteer Fire Department Ambulance Squad, 460 Main Street, Bolivar, NY 14715 or to Mercy Flight, Olean, NY 14760.

To order memorial trees or send flowers to the family in memory of Sandra M. Parker, please visit our flower store.