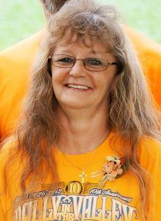 SHINGLEHOUSE, Pa.---Theresa A. Robinson, 59, of Shinglehouse, passed away unexpectedly from natural causes on Tuesday, August 28, 2018, in the Olean General Hospital, Olean, N.Y.

Born on July 6, 1959 in Port Allegany, she was a daughter of Wallace W. and Kathleen Brodfuehrer Greene.  On July 31, 1988 in Smethport, she married Michael J. “Mike” Robinson, who survives.

Theresa attended Smethport High School and Oswayo Valley High School in Shinglehouse.  She had previously been employed at the former Hadden’s Store in Ceres.

Theresa formerly attended the First Baptist Church in Shinglehouse.  She enjoyed reading and flower gardening.  Her greatest love was spending time with her family, especially her grandchildren.

In addition to her parents, Theresa was predeceased by two brothers, John Greene and Thomas Greene; and a sister, Karen Schneider.

Friends may call from 9 a.m. to 11 a.m. on Friday, August 31, 2018, at the Virgil L. Howard Funeral Home, 118 South Union Street, Shinglehouse, where funeral services will follow at 11 a.m. with the Rev. Russell J. Horning, pastor of the First Baptist Church, Shinglehouse, officiating.

In lieu of flowers, memorials in Theresa’s name may be made to the First Baptist Church, PO Box 68, Shinglehouse, PA 16748.

To express condolences or share a fond memory of Theresa, please visit www.virgillhowardfuneralhome.com

To order memorial trees or send flowers to the family in memory of Theresa A. Robinson, please visit our flower store.